Since I was already using my Milk Bar cookbook to make the pretzel ice cream, I thought I’d finally pay some attention to the small savory section in the back if the book. The chapter is dedicated to the bakery’s “mother dough”, a simple dough that is used to make all different kinds of savory goodies.

Bagel Bombs are a sort of all-in-one breakfast sandwich, with the filling baked right inside the dough. The recipe in the book uses a bacon, scallion, and cream cheese plug, but since we do not eat bacon (nor do we eat milk and meat together) I needed to come up with an alternative. Yes, I could have just omitted the bacon, and had a plain scallion cream cheese plug, but I wanted something with a little richness in there.

I ended up using some chopped homemade smoked-paprika oven-dried tomatoes in them, which was perfect. I served these for dinner with a huge salad, and everyone loved them! 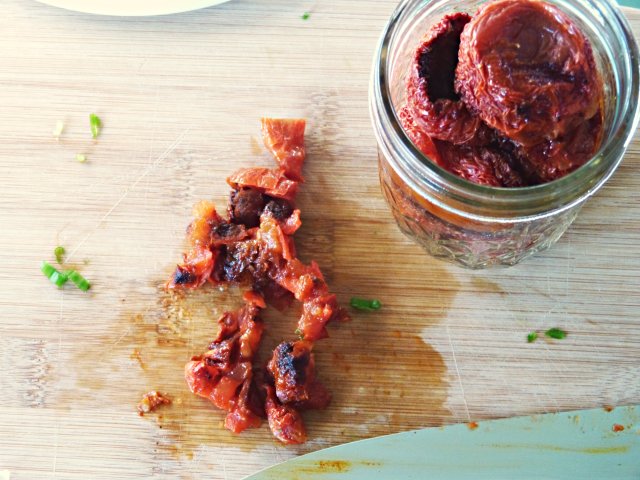 Like most Milk Bar recipes, this is made up of a few components, but they can all be made ahead of time: the cream cheese plugs up to a month ahead, the everything bagel mix up to 6 months ahead, and the dough up to a week ahead. And once you’re ready to make them the assembly is pretty easy.

Mine all exploded in the oven (which is, apparently, quite normal). But I guess that’s why they’re called bombs!

This recipe uses only half of the mother dough. I do have another recipe coming up that will use the other half but, if you prefer, you can double the plug & bagel mix amounts and make 16 bagel bombs.

If you’d rather, you can use jarred oil-packed sun-dried tomatoes (blotted dry with a paper towel) for this if you don’t want to make your own oven-dried tomatoes.

1. Place the cream cheese into the bowl of a stand mixer fitted with the paddle attachment, and beat on medium speed until creamy. Scrape down the sides of the bowl and add the tomatoes, scallions, sugar, and salt. Mix just until it’s incorporated.

2. Evenly divide the mixture into 8 portions, and place them onto a lined quarter-sheet pan. Freeze until solid, about 1 to 3 hours. If not using right away, place them into an airtight container and freeze for up to 1 month.

Use whatever tomatoes you find that look good. Normally I’d use Roma’s, but even for this time of year they looked really bad, so I used tomatoes on the vine. You really only need about one tomato for this recipe, but make as many as you want—you can use the leftovers in a salad or panini (anywhere you’d use sun-dried tomatoes, really). Cut the tomatoes in half, scoop out the seeds with a small spoon, and place in a bowl. Drizzle with olive oil, and mix them with your hands to make sure they are all coated. Place in a parchment-lined baking sheet, sprinkle with salt, pepper, and smoked paprika. Bake in a 250° oven for about 6 hours, until dry (but not bone dry; you want them to be fairly soft). Mine took about 7 1/2 hours, because my tomatoes were really juicy). Allow to cool.

grapeseed oil, to grease the bowl

1. Place the flour, salt, and yeast in the bowl of a stand mixer and stir together, using the dough hook like a spoon. Add the water, and keep stirring it by hand with the dough hook until the mixture just starts come together.

2. Attach the dough hook to the mixer, and mix the dough on the lowest speed for about 6 or 7 minutes, until the dough looks like a wet ball and bounces back softly when pressed.

3. Grease a large bowl with the oil and turn the dough out into it. Cover with plastic wrap and let the dough sit at room temperature for 45 minutes (it may not rise much, and that’s okay).

4. Use the dough then, or store it in an airtight container in the fridge for up to 3 days or in the freezer for up to a week. Bring the dough to room temperature before using!

Combine all the ingredients together in a bowl. Can be store in an airtight container for up to 6 months.

1 recipe Everything Bagel Mix (above)

1. Preheat oven to 325°F and line a large sheet pan with parchment paper.

2. Flatten the dough down on a smooth, lightly floured surface, and divide evenly into 8 pieces. Using your fingers (I lightly floured my hands, because the dough was a little sticky), gently stretch each piece of dough into a circle about 3 inches wide.

3. Place a cream cheese plug onto the center of each circle, and bring the edges up and around the plug. I used a bench scraper to do this, because the dough was sticking to my work surface (you can sort of see this in the pictures above). Lightly flour your hands, and gently roll the ball between your palms to make a round shape. Place them onto the sheet pan, 4 inches apart from each other.

4. Whisk together the egg and water, and generously brush onto the rolls. Sprinkle evenly, and heavily, with the bagel mix.

5. Bake for 20 to 30 minutes, until the bombs are golden brown. Don’t worry if the cream cheese explodes out; that’s normal—you can leave it as is, or tuck it back into the bomb after it cools a bit.

6 Remove from the oven, and serve warm. If you are making these ahead of time, warm them up before serving. You can keep these, well-wrapped in plastic, in the fridge for up to 3 days.

This tomato salad is sooo good! Make sure to serve it with some good bread for dipping into the juices – it’s fabulous!