Despite it’s cutesy name (I hate cutesy names), these sloppy joes were really good – a little sweet, a little spicy, and very messy! (I learned the hard way that they are easier to eat as an open-faced sandwich.) 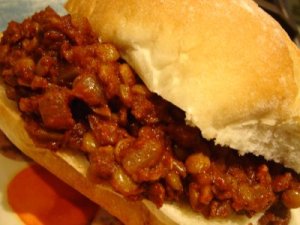 Snobby Joes
Veganomicon, Isa Chandra Moskowitz & Terry Hope Romero
1 cup uncooked lentils
4 cups water
1 tablespoon olive oil
1 medium-size yellow onion, cut into small dice
1 green bell pepper, cut into small dice
2 cloves garlic, minced
3 tablespoons chile powder
2 teaspoons dried oregano
1 teaspoon salt
1 (8-ounce) can tomato sauce
1/4 cup tomato paste
2-3 tablespoons maple syrup
1 tablespoon prepared yellow mustard
4-6 kaiser rolls or sesame buns, sliced in half horizontally
Pour the lentils and water into a small saucepan. Cover and bring to a boil. Once the mixture is boiling, lower the heat and simmer for about 20 minutes, until the lentils are soft. Drain and set aside.
About 10 minutes before the lentils are done, preheat the oil in a medium-size saucepan over medium heat. Saute the onions and peppers for about 7 minutes, until softened. Add the garlic and saute for a minute more.
Stir in the cooked lentils, chile powder, oregano, and salt. Add the tomato sauce and tomato paste. Cook for about 10 minutes. Add the maple syrup to taste and the mustard, and heat through.
Turn off the heat and let the pot sit for about 10 minutes, so that the flavors can meld, or go ahead and eat immediately if you can’t wait.
4-6 servings
I served the sloppy joes with this coleslaw, which was fantastic!

These sandwiches were really good, and I liked that the vegetables were cooked right on the panini grill. I wanted to use rosemary bread instead of the olive bread, but the store was out of it when I went so I used a baguette instead.

Grilled Vegetable Panini
paninihappy.com
Balsamic vinaigrette (bottled or homemade)
1 Japanese eggplant, sliced lengthwise into 1/4-inch strips
1 zucchini, sliced lengthwise into 1/4-inch strips
1 yellow onion, sliced into 1/4-inch rings
Extra-virgin olive oil
Salt and pepper
4 slices olive bread (I used a baguette)
Hummus
2 roasted red peppers (I made my own, but you can use bottled – just pat dry)
4 slices provolone cheese
Place eggplant and zucchini in a plastic bag with enough balsamic vinaigrette to coat the vegetables. seal and marinate in the refrigerator for 1 hour.
Preheat panini grill. Brush olive oil on both sides of onions, season with salt and pepper and place on the grill. remove eggplant and zucchini from marinade (discard remaining marinade) and place onto the grill as well. Close the lid and grill the vegetables for 3-4 minutes until cooked through.
Brush olive oil on the outer sides of each bread slice. On the bottom bread slices (oil side down) spread a layer of hummus. Top with slices of eggplant, zucchini, red pepper, onion, cheese, and the top bread slices (oil side up).
Grill 3-4 minutes until cheese is melted and golden grill marls appear.
Serve immediately.
2 servings
This is a fantastic recipe for tomato soup! It has to be started ahead of time, but once the tomatoes and garlic is roasted it comes together in no time.
I let the tomatoes roast overnight, and I roasted the garlic in the morning, then put them in the fridge until I was ready to make the soup. (I did not make the garlic chips, but would if I was serving to company.) 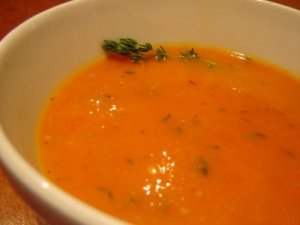 Oven-Roasted Tomato and Garlic Soup
Bobby Flay, Foodnetwork.com
Oven Roasted Tomatoes:
4 plum tomatoes, halved lengthwise
2 garlic cloves, minced
2 tablespoons olive oil
Salt and freshly ground pepper
Preheat oven to 200 degrees F. Place the tomatoes cut-side up on a baking sheet. Combine the garlic and olive oil and brush the tomatoes with it. then season with the salt and pepper. Roast until dried and soft, about 8 hours.
Garlic Chips
1 cup olive oil
8 garlic cloves, peeled and sliced paper thin
heat oil in a medium skillet until the oil starts to simmer. Add the garlic and cook until the slices begin to brown and curl. Remove with a slotted spoon and drain on paper towels.
Tomato Soup
2 tablespoons olive oil
1 medium Spanish onion, chopped
1/2 cup white wine
4 cups chicken stock
2 cups canned plum tomatoes (I used 1 15-ounce can, drained)
6 roasted garlic cloves
Oven Roasted Tomatoes
2 tablespoons fresh thyme leaves
1 tablespoon honey
Salt and white pepper
Heat the olive oil in a large saucepan over medium-high heat until it begins to smoke and saute the onions until golden. Add the wine, raise the heat to high, and reduce until almost dry. Add the stock, canned tomatoes, roasted garlic and roasted tomatoes and reduce by one-quarter.
Puree the mixture in a food processor (I used an immersion blender) and return to the pot. Add the thyme, honey and salt and pepper to taste.
Garnish with garlic chips.
8 servings

This recipe is a favorite in our house. I use boneless, skinless chicken thighs because they are a lot more moist, and serve it with a store-bought tahina sauce. I also broil it instead if grilling it (I don’t bother to skewer them), and, when possible, I marinate it for several hours.

(I’m sorry the picture is not so great. I had a long day and was just trying to get the picture done quickly.) 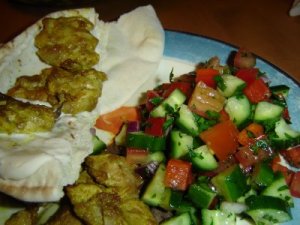 I did not feel much like cooking tonight, so this sandwich was perfect – and delicious! 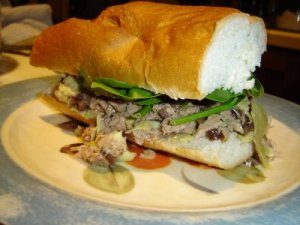 Artichoke and Tuna Panini with Garbanzo Bean Spread
Giada’s Kitchen, Giada De Laurentiis
Garbanzo Bean Spread:
1 (15 1/2 ounce) can garbanzo beans, drained and rinsed
2 garlic cloves
1/4 cup fresh mint leaves
2 teaspoons grated lemon zest
3 tablespoons freshly squeezed lemon juice
3 tablespoons extra-virgin olive oil
1/4 teaspoon salt
1/4 teaspoon freshly ground black pepper
Panini:
1 cup pitted black olives, finely chopped
2/3 cup extra-virgin olive oil (next time I would use less)
1/2 teaspoon salt
1/2 teaspoon freshly ground black pepper
2 (5 1/2-ounce) cans Italian tuna in olive oil, drained (I used chunk light in water)
1 (13 3/4-ounce) can quartered artichoke hearts, drained
8 mini baguettes, halved lengthwise
2 cups arugula (I used baby spinach)
For the spread:
Combine all the ingredients in a food processor. Pulse until the mixture is smooth. Transfer to a small bowl and set aside.
To make the panini:
Combine the black olives, olive oil, salt, pepper, tuna, and artichokes in a bowl and toss gently to mix.
Lay out the sliced baguettes. Spread both halves of the baguettes with the garbanzo bean spread. Spoon the tuna mixture onto the bottom half of each sandwich and top with the arugula. Close up the sandwiches. Wrap one end of each sandwich in parchment paper to make it easier to eat, if you like.
8 servings

This morning I made myself a really good panini using some of the leftover olive bread from last night, roasted red pepper, feta, and a bit of chopped fresh basil: